Step into an Anime World in this Fantastic Comedy RPG!

KonoSuba: Fantastic Days is a mobile RPG by Nexon, it's based on Natsume Akatsuki’s KonoSuba light novel series as well as the animations. It is highly welcomed by the fans of KonoSuba: God’s Blessing on this Wonderful World!.

It’s a great chance for them to experience this wonderful world in person with the original Japanese voice casts as well as the top-notch art design. It’ll be a thrilling adventure along with the famous characters, Aqua, Darkness, Megumin and so on. What’s more, new heroes will come and join you on this trip,  too. Your job is to rescue the realm from the forces of evil. Don’t get cold feet. Let’s start the adventure!

In the beginning, you’ll be guided by the protagonist most of the time. By watching the storylines, quests will be unlocked for you to battle.
There are plenty of characters, you won’t be collecting all of them at once. New characters can be acquired by recruitment. Quartz is needed when recruiting, it can be collected after accomplishing the tasks or purchases.
Only by winning the quests can you continue to the following storylines.

Quests are divided into main ones and free ones. During the quests, other characters will join you, and you should select different teammates carefully according to the rivals you’re facing.The battle controller is at the lower right corner. Choose wisely on the skill you use from the character each time. Auto-combat mode is supported in the quest, so it can keep you hands-free if needed. 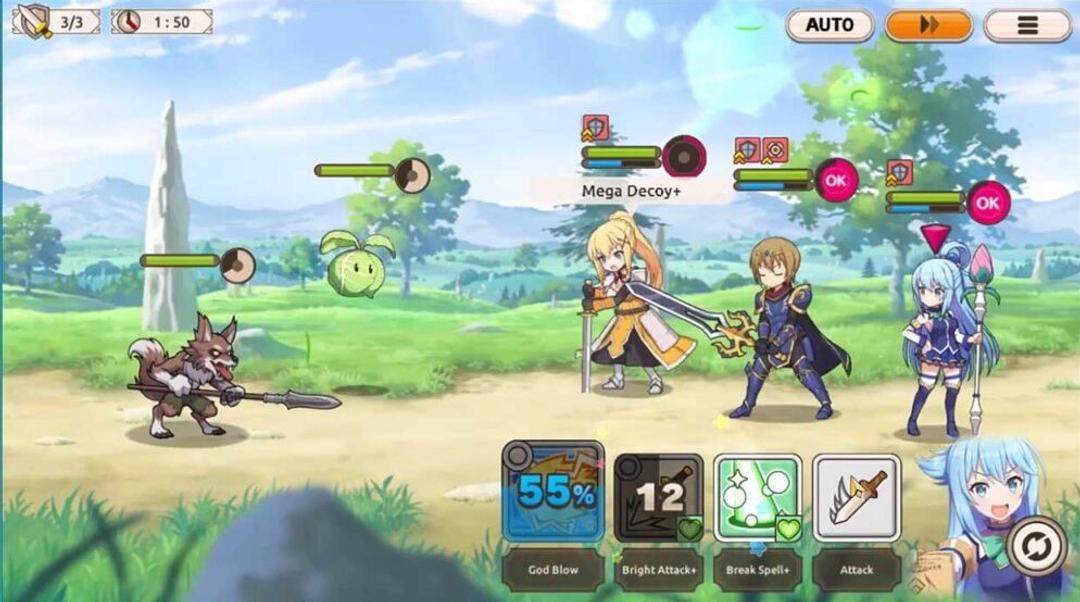 The time of storylines is longer than the quests. Sometimes it takes more than a few minutes. But you can always skip it when getting bored. The art style of KonoSuba: FD is dedicated to its original light novels. Though the game is for smartphone users, the scenes and surroundings are of high quality. The storyline can be enjoyable for it is not only fascinating but always with a light sense of humor. 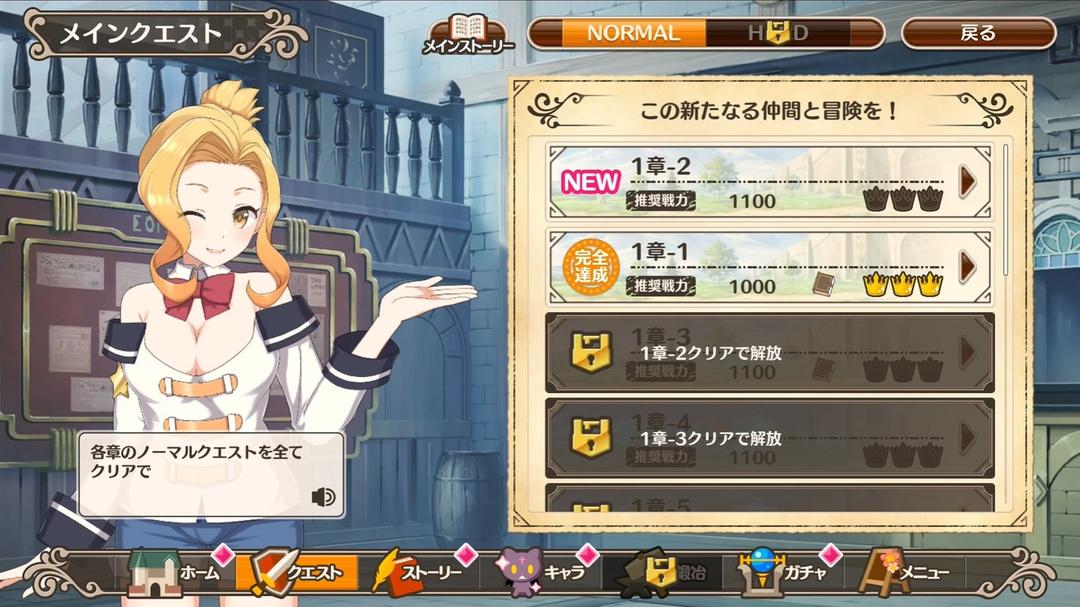 Character & Build Your Own Team

Each character has different skills. Some have healing power, some are the best soldiers. It’s vital for you to understand their skills for the ultimate victory.
If you’re a beginner, it’s the best to know that KonoSuba is very reroll-friendly. It’d be very lucky for you to recruit some rare characters to form the best team.
There are four Tier Lists of the characters:
Tier List | Konosuba Fantastic Days Wiki | Fandom 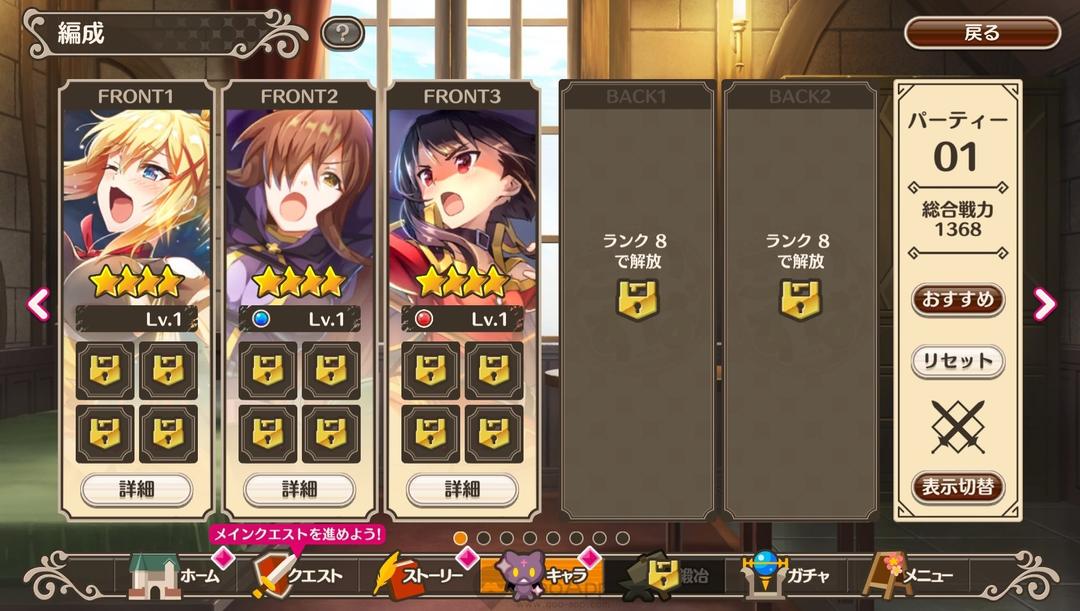 In the beginning, the battle can be easy to win. However, while you keep digging into it, there may be a time when you find it hard to beat your enemies. That’s when the daily allowances become helpful. Through completing the free runs of allowances, you may win rare materials for upgrading your characters to improve their power. However, the number of free runs is limited, you may need to pay for subsequent runs if you want to keep upgrading. 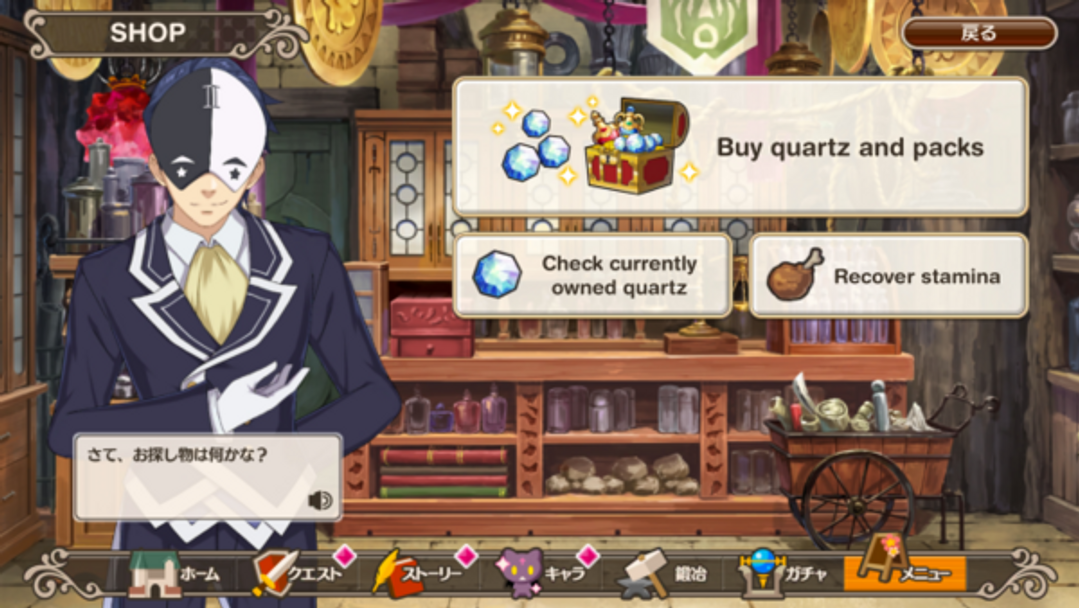 I can see why KonoSuba:FD has become so popular, especially among the fans of the light novels and animations. Playing the game delivers a sense of realization that you’ve entered the world described in the novels. It’s also a good free time-killer though it’s not an intense game which may get you addicted to it. For those who are looking for a game to invest much time in it, this game is not the best choice.

Tag
RPG
Apps in this article

Step into an Anime World in this Fantastic Comedy RPG!