Game of Sultans Review - Is It Worth Playing?

Game of Sultans is a simulation RPG mobile game developed by Mechanist Games. The game was originally released in 2018 and had gained huge popularity especially in Russia and Turkey. Most players were introduced to the game on Youtube, Instagram, and other platforms with their overwhelming and breathtaking ads. However, does the game just like the advertising shows? Is it worth playing? Now let's dive deep into this RPG game.

Game of Sultans is not exactly a war game, but an empire simulation RPG where you can experience your life as Sultan. The game starts with your old father dying and you need to take the throne to become the new ruler. Before entering the game, you can choose your preferred character: the male Sultan or the female ruler. Besides dealing with the daily Imperial Affairs, you can also expand your territory in this game.

The game is not just about companions, heirs, or war battles. There are many tasks and activities to do as the Supreme Ruler, such as administering state affairs in the Imperial Parliament, visiting the Masquerade to get new consorts, recruit and train your Viziers to raise the national power, deploying soldiers to battle against enemies, receiving tributes from unlocked Envoys, hunting and horse riding, and many more. Most of the activities are locked and you can access these features when you get enough game points and experience. 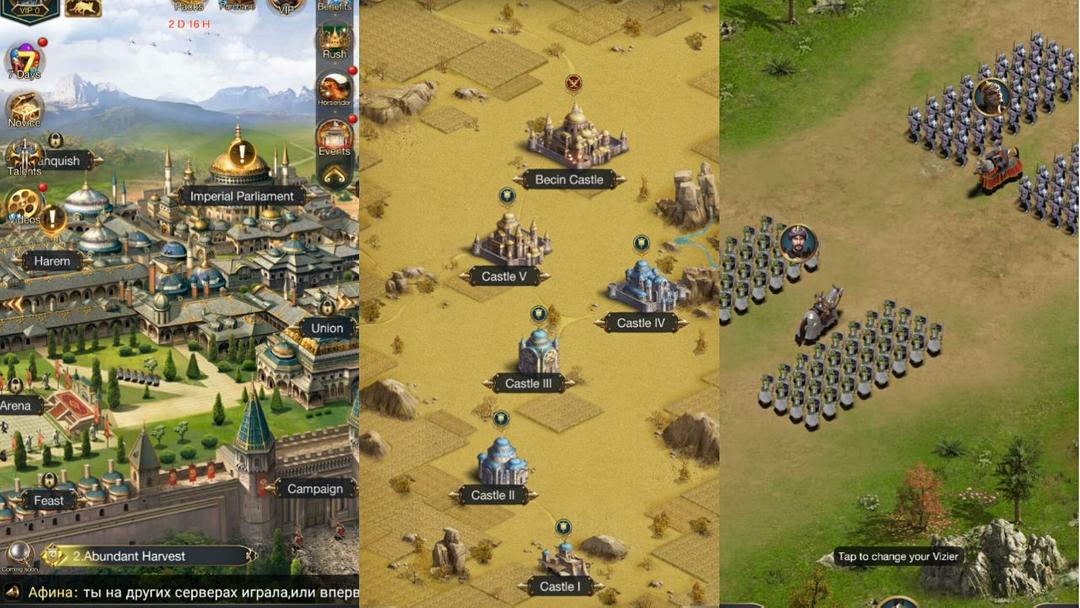 When it comes to SLG games, you may think about building your city, collecting resources, and training your soldiers. Although Game of Sultans is similar to other SLG games, it doesn't include the building element. The game also simplifies the battle progress. All the battles are auto-played and can be finished within two minutes if you have enough soldiers and energy.

Game of Sultans also has a generous reward and bonus system. You can get all kinds of resources, rewards, and bonuses you need through main quests, achievements, events, and purchasing at the store. These resources and rewards are essential during your playing. For example, you levy or finish different tasks to get rewards like gold coins and soldiers. You can use these soldiers to defeat enemies. Your victory will help you win tons of gold coins, and these coins can help you level up your Viziers and raise national power. The gameplay is addicting and it just keeps me playing the game for hours. 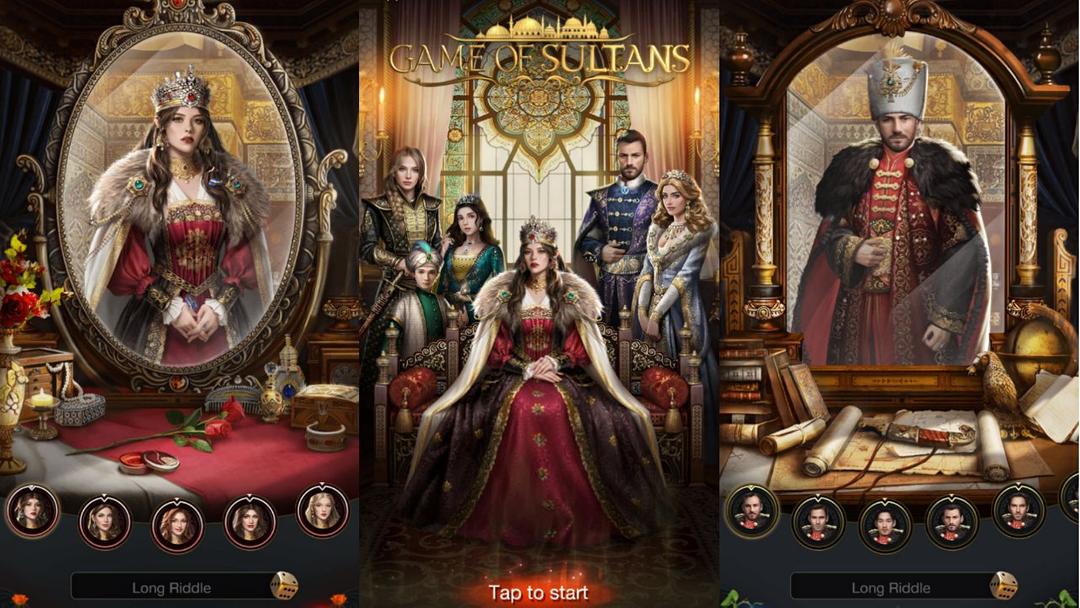 Game of Sultans has very good graphics and the character design is especially impressive. Sometimes it seems that you were transported to the ancient time of the Ottoman Empire with its splendid palaces and beautiful royals. Thanks to the detailed instructions and main quest guides, you can just tap the screen and interact with the game quite easily.

It's free to download this game on your Android and IOS platforms. Game of Sultans contains in-app purchases that allowing you to buy resource packages to improve your gaming experience or get more powerful Viziers/Consorts through VIP packs. As we mentioned above, the game has a great resource and reward system, you can unlock more Viziers and Consorts by gaining more game points and experience without paying extra fees. One of the fascinating things about this game is that there are no distracting and annoying ads during your playing. But Game of Sultans has a "Video" button on the left side of the screen and players who want more diamonds and bonuses can watch video ads to get these rewards.

Is Game of Sultans kids friendly? 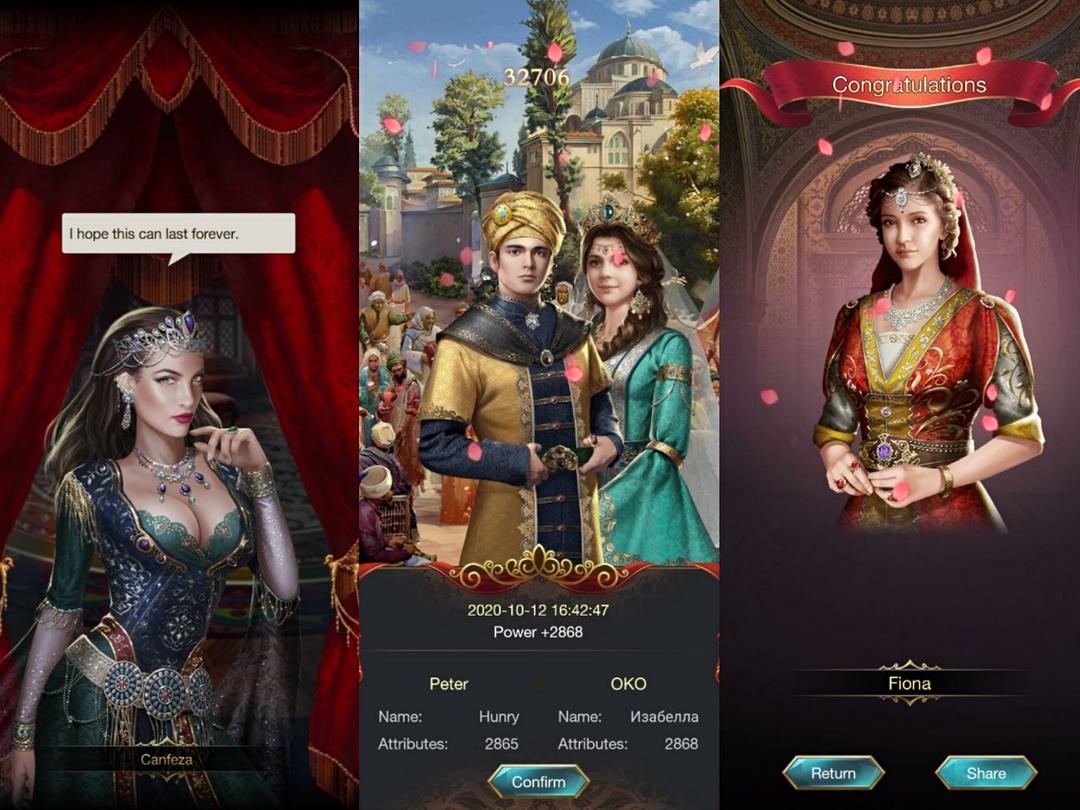 Unlike its controversial ads on the internet, Game of Sultans actually contains no violence, blood, torture, or brutality. The game sets in a fictional world - the ancient Ottoman Empire and it does have things like selecting your consorts, rasing your heirs, battling against your enemies, and so on. App Store has rated this game as a suitable option for players aged 12+. Parents should make sure their children are old enough to play the game.

All in all, Game of Sultans is a great option for RPG and SLG fans to play. There is no city building in the game but has tons of tasks and activities to keep players entertained for hours.